What are the wealth secrets of the affluent? There are many differences between the rich and the poor. You can argue that many wealthy people had a better start in life. However, many wealthy people didn’t start out that way. Whatever you believe about wealth creation, the truth is that the super rich think differently about money than the poor.

Wealth Secrets Of The Affluent

Rich people spend money in a different way to poor people. Poor people will spend money on ‘stuff’. They live pay cheque to pay cheque, never really knowing how to break out of the working cycle. Their money is nearly all gone by the time they get paid again. Wealthy people invest their money in acquiring assets, instead of buying ”stuff’. An asset is something which pays you money. You may think your car is an asset, but it is actually a liability. It costs you money every month and it depreciates in value over time. Wealthy people concentrate on building a portfolio of assets which regularly pay them an income.

One of the most important wealth secrets of the affluent is the ‘pay yourself first’ principle. People who struggle with money don’t do this. They are the last person to get paid after all of their income has been accounted for. They pay their rent or mortgage, their bills, their car payments and buy food and clothes. After all that money is spent they look at what is left and usually will go out and spend that on themselves. Wealthy people pay themselves first. That is they pay into a separate savings account a percentage of their income before making any other payments. This has a twofold benefit.

The government realised this was a good idea and implemented the structure of tax payments which employees receive today. That is, the government takes out their cut of money before you even get paid. They take employee tax at source – unless you are self employed of course. They did this because they realised that most people are incapable of putting aside money each month in order to pay a big bill at the end of each year. Chasing people for large amounts of money once a year was much more difficult than simply taking a percentage straight from their income each month. 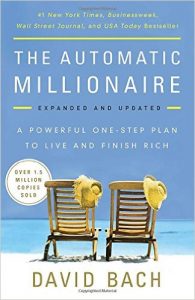 In David Bach’s ‘The Automatic Millionaire’ he talks about something which he calls the latte factor. A latte factor refers to the small purchases which everyone makes in order to make their life that bit nicer. For example, how may times a week do you purchase a latte (coffee) from a coffee shop? Given that a latte at a shop costs the best part of £5, and if you purchase one a day each day for 5 days in the week, your total expenditure on coffees is £25 a week. Given a 50 week working year that equates to £1250 spent on coffees each year.

That’s £6250 over a 5 year period. Your ‘latte’ factor may be something other than a latte coffee. But everyone creates habits which costs them money. In the short term this may seem insignificant. However over a longer span of time you can see the costs mounting up. What the wealthy realise is that it isn’t always the money you earn which determines your wealth, but on what you spend your money on over time.

The Law Of Increasing Returns

The book The Slight Edge By Jeff Olsen cites small daily practices as having huge power over time. This is another important one of the wealth secrets of the affluent. Take the above example of the latte factor. If, instead of having those coffees each day, you set up an automated payment for the money you would have spent into a saving account, not only would you have more than the £6250, you would also be earning interest on the interest.

As your investment grows so does your interest, which further grows your investment. This same concept can be applied to other areas of your life too such as fitness, learning a new skill or improving your knowledge of business. Small daily habits compound over time to generate large tangible results. Whatever your habits are on a daily or weekly basis, they can compound over time to create the finished product. This is true in terms of health, wealth and various other aspects of your life. What habits are you creating which serve you and which are leading your life downhill?

The phrase big hat no cattle comes from David Bach’s book The Automatic Millionaire. It means you want to appear like a wealthy cattle rancher, but in fact you only ‘appear’ so. In truth you have no ‘cattle’. Many people seek the trappings of wealth such as a nice car a large house and an expensive watch. However, wanting these things without having the money to own them can mean you over extend yourself to the detriment of your bank account. If you are constantly stressed about money what is the use in having a flashy car or watch? Maintaining a humble approach and living well beneath your means can allow you to build wealth. Putting value on material possessions which are out of your financial reach can bankrupt you.

Another one of the wealth secrets of the affluent is to maintain your lifestyle as your income grows. It is very tempting to buy a nicer car and move into a nicer neighbourhood, especially if your income has grown. However, if this means you are struggling financially then it doesn’t help you grow your wealth. Rather it stunts your financial growth. You end up having higher car payments and larger bills which eats up your new capital. You can’t therefore invest it into new assets and grow your wealth. You become ‘stuck’ in the habit of maintaining the self image of the ‘look’ of the life you want, rather than concentrating on growing your wealth from the inside out.

If you’re in debt you need to lower your interest payments and get out as soon as possible. Debt is a method of generating wealth for the creditors. By having debt and staying in debt you are paying money out each month which could be used to build wealth. If you regularly service debt payments you are throwing money away. Paying off debt quickly and then staying out of debt is one of the most important wealth secrets of the affluent. The wealth don’t do debt. They don’t buy things on credit either. Unless you have the money to buy something, don’t buy it. Make this a life long habit and you will save a fortune. If you use a credit card pay it off in full each month.

Creditors want you to keep buying on credit. They want to you to pay the least amount each month so your debt continues to grow. You end up paying thousands in interest payments and only service debt rather than clearing it. Don’t do debt. If you’re in debt you need to get out fast. Read The Automatic Millionaire by David Bach for more advice on getting out of debt.

A mortgage is the same as a debt even though you have a potential asset which you will eventually own. However a house can be an asset or a liability. Unless your house pays you money every month, consider it a liability. Owning your home outright is another important of the wealth secrets of the affluent. If you can do this you can save a costly monthly payment. This money can then be used to acquire more assets. Ideally, use income to over-pay on your mortgage payments and pay off your mortgage early. The longer you have your mortgage for, the more you will pay in interest payment, so paying off early will doubly save you money, once on interest and then on the money you will have extra each month.

Success Comes To The Success Conscious

An article on wealth secrets of the affluent wouldn’t be complete without a mention of Napoleon Hill. Napoleon Hill has written one of the most successful books on success and wealth creation ever written “Think and Grow Rich”. You can download a free copy here- Think and Grow Rich PDf. In chapter 2 of the book he uses the metaphor of a garden to explain the seeds of thought germinating as ideas in the mind. As he explains, whatever thoughts we allow to be constantly or regularly present in our consciousness will inevitably result in the attitudes and behaviours we bring into the world. This in turn will determine the results of our lives.

Success comes to those who become success conscious. Of course you also need to act. It is not enough simply to be a wishful thinker.

What are the wealth secrets of the affluent? The affluent think differently that the poor. They apply this knowledge on a regular basis. They concentrate on building assets – things which bring them income regularly, and reduce or remove any liabilities – those things which cost money regularly. They concentrate on building businesses which can be leveraged to create wealth. If you are looking for such a business take a look at this video series which will explain how to build an online business from scratch.

Wealth Secrets Of The Affluent

Can you think of any more wealth secrets of the affluent? Please leave a comment below if so. Sign up to my email video series to learn more about starting your own internet based business.