What are the qualities of successful entrepreneurs? And what makes a successful entrepreneur in the first place? Is it only money? One of my main takeaways from meeting with Stuart Ross and Jay Kubassek is that of mindset. An entrepreneur has a mindset which is not obsessed with things as they are now but is able to see what might be and remove the obstacles to get there. Entrepreneurs think outside of the box and create new opportunities, rather than getting stuck and imprisoned by old habits and circumstances.

If somebody offers you an amazing opportunity but you are not sure you can do it, say yes – then learn how to do it later! Richard Brandson

So, one of the most powerful qualities of the successful person is an empowered mindset. Entrepreneurs also are not afraid to take risks. Ask any successful actor how they got there and you will be unlikely to hear that it was by always being comfortable and having a ‘safe’ amount of money in the bank all the time.

Sylvester Stallone worked several jobs before making it as an actor and was completely broke before he achieved success in Rocky. Stallone refused to sell the script to Rocky which he wrote,  unless he was allowed to star in it. Despite having a pregnant wife and little money, he held out until he found two producers, Irwin Winkler and Robert Chartoff, who allowed him to play the lead. 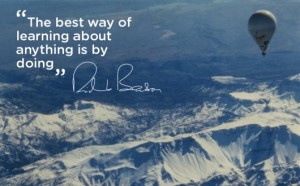 Belief is probably one of the main characteristics which successful entrepreneurs have in common. They believe in something which many who only attain mediocrity never achieve. They believe in themselves and in lifting the bar. For most people going up against the likes of Coca Cola and Pepsi, or even other airlines when he founded Virgin Atlantic in the early 80’s would be an impossible task. For Richard Branson, though, nothing is impossible.

Not only do entrepreneurs believe in themselves but also that things can be done which haven’t already been done. They have a ‘can do’ mentality and are action takers.

When I met Jay Kubassek one of the main things I remember striking a chord with me is about justifying your behavior to people constantly. I would do this always and then realized that I was ‘asking permission’ to take a certain course of action or do a certain thing. Being a leader means taking a course of action and believing in where you are going despite what people will say about you. It means taking full responsibility for your actions and your life – without the need for constant approval from others.

Entrepreneurs will seldom complain and have a upbeat attitude about life. They mix with other positive people and avoid spending time with the complainers and naysayers. Choosing who to spend time with is a benefit of being a successful entrepreneur but it is also something most people can choose more than they do. They also are a continuous work in progress and never rest on their laurels. They have an ability to look into their own thinking, limitations and beliefs and create new outcomes by challenging their own limited thinking. They keep an end goal in mind or an ‘eye on the prize’.

Can you think of any more qualities of successful people?

Learn how to overcome your own limitations and empower yourself: Meet Stuart Ross and Jay Kubassek and learn how to build your own successful internet based business with new mindsets and powerful skills sets.