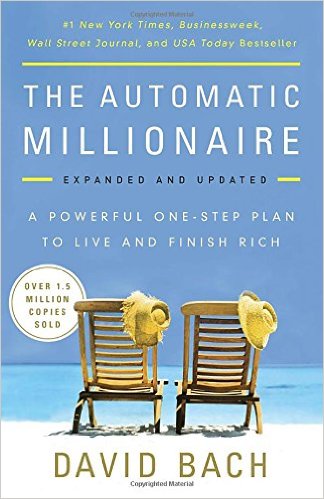 Many millionaire simply learned good habits and kept doing them. In The Automatic Millionaire By David Bach he talks about some simple concepts which allows anyone to change their spending and earning habits. Over years this can make a dramatic difference to the size of your bank account.

Of course not everyone is in a position to do all of these things. But you can still start to think more like a millionaire by taking on board some of these concepts. The two things you can control are your earnings and your spendings. Millionaire thinkers know this and have learned to be careful with their spending. It’s much easier to control your spending than to earn more money.

But it’s not just being spend thrifty that makes a millionaire. If that was the case everyone could become a millionaire just by saving up! Millionaires often own their own businesses or do things differently. They know that a job will usually only pay them just enough to get by. They look for different opportunities which many people would just avoid. Millionaires think about becoming millionaires before it happens. They don’t just ‘arrive’ at having a million in the bank.

Jack Canfield, author of Chicken Soup For The Soul didn’t become a millionaire until he was 51. If you saw him on the movie The Secret he shared his thoughts on how millionaires think:

If you think like a millionaire, can you become one? Everything starts with beliefs. Unless you believe something is possible, you can’t achieve it. You will dismiss it as unobtainable, and go about your daily life as normal. Millionaires believe it is possible to become millionaires, and it is possible for them. Unless they hold this belief, they would never have achieved it.

Confirmation bias is a tendancy to search for, interpret and recall information which aggrees with our pre-existing beliefs and ideas. If then our beliefs point to the hypothesis that it is possible to become a millionaire, we search for ways to make this happen. If, on the other hand we doubt ourselves and our ability to do this, we look in the other direction and we actively search for the reasons why we can’t achieve it!

In the video above Jack Canfield talks about how he tapped into his unsonscious to visualise having a millionaire lifestyle, long before he achieved it. By attuning our beliefs to what we really want, we can program our unconscious mind to actively search for ways to achieve it. See Stuart Lichtman’s book How To Get Lots Of Money For Anything Fast for detail on how to specifically do this for the best results.

How Do Millionaires Think – Assets Vs Liabilities

Most people think of their house and their car as assets. Millionaires think of an asset as something which makes them money. A house doesn’t necessarily make you money. In most cases it will be costing you mortgage payments every month. A millionaire sees this as a liability not an asset. A car is a liability too. It costs money and depreciates in value. Millionaires focus on building their assets and limiting their liabilities.

Most millionaires look at ways of leveraging their time to generate more income. This might start by getting the highest paid job possible. However, if you are working in a job you are always limited by your time. If you trade time for money you will always be trapped by a limited income.

Millionaires think of ways to generate more income without selling their time. This can come in many forms. Network marketing businesses let you leverage other people’s efforts to increase your income. Creating something like a book or a screenplay for a film can earn you royalties (this is what Jack Canfield did). An internet business can let you leverage your time too, and you can scale your business up with tools, strategies and online marketing.

How do millionaires think? Millionaires don’t just put their money under the matress. Getting your money to earn you money is the best way to make more of it! Working hard for money is not how people become millionaires. They might work hard, but they also work smart. Don’t work hard without working smart too! Millionaires invest their money to earn more money. Living beneath your means is the first step towards building up some savings so you can invest them in some way.

Is Making Money A Struggle For You?

Most people make some money and then go out and spend it. Millionaire don’t do this. They continually look for ways to grow their wealth and continue to live below their means. Most people are continually drifting between having money and being in debt. This is a cycle which never ends. They get money and spend it straight away. Only when things get tight do they reign in their spending. Jeff Olsen illustrates this in his book The Slight Edge with the failure, survival and success chart below.

Breaking out of this cycle can mean choosing a path which means more to you than simply survival. If money is the only goal then why struggle just to make more of it if you don’t need it? Millionaires have larger reasons than money alone to get to where they are. Their goals are set in line with their values such that making money isn’t a struggle.

How do millionaires think?

In 1908 Napoleon Hill was set a task set by Andrew Carnegie to create a document for a simple success formula.

He interviewed some of the most successful millionaires of the time and documented his conversations which culminated in the writing of his famous book Think And Grow Rich. First published in 1937 it went on to sell 70 million copied worldwide. You can access a free pdf of Think and Grow Rich here or buy it on Amazon here.