I left school shortly after my A-levels and went straight into dead-end jobsville! I didn’t have a clue what I wanted to do so worked for warehouses, supermarkets and had several driving jobs into my 20’s when I was signing on unemployed in between jobs. I knew there was a time limit to this lifestyle so I tried to make the most of it and trained in new things as much as I could. I did several ‘stage A’ and diploma type qualifications but didn’t really have a career focus.

My main interest was in martial arts at the time and so I pursued it with all my might. Of course money was the main problem and I worked as a delivery driver, building site hand, and pretty much anything that came my way. In my early 20’s I met a stuntman and it lit a fire in me. I sent off to Equity – the Actors Union, and found out the qualifications I needed to become a Equity registered stunt performer. There was a lot involved and I set about doing my training which covered 6 disciplines to pretty much instructor level. I also needed to gain experience in front of the camera so I worked as a TV extra for much of the time. 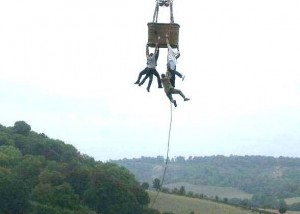 After 4 years of training in various disciplines, including my martial art – Wing Chun Kung Fu and several other styles also, I managed to join the Equity Stunt Register. It had been a long slog and during all of which time I had been pretty much broke. The constant issue with money had led me to try pretty much every vocation I could lay my hands on and I discovered the internet around this time. I was using ebay to sell items I had picked up in charity shops to help subsidize my training and the extras work which paid very little.

After joining the stunt register very little changed for a while and my fist job didn’t come in until 2 years later. I worked as a taxi driver earning just enough to get by. The first job came in and I managed to get about a week’s worth of work which paid off my credit card! It was a great experience on a film called Enduring Love doubling Rhys Ifans. After that it went quiet again and I turned to the internet as a source of income. 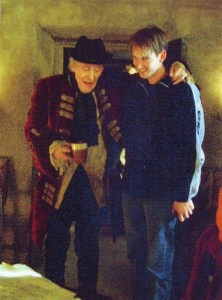 (With the late Peter O’Toole on Casanova)

Still to this day the work is sporadic but the income I have made has allowed me to look into other career paths of which affiliate marketing has intrigued me more than all the others.  The main reason I took to working online was the flexible nature of the work. I had had many jobs to fit around the stunt work but employers are never too pleased to allow you to drop your job at a moments notice and disappear for several days or weeks at a time.  The internet allows you to do this. You can drop it and pick it up whenever you like.

Only recently after joining the SFM have I really seen the huge potential of affiliate marketing and how it can change lives. To find our more and join the 7 day video course sign up here.

I still do the Stunt work and also teach Kung Fu which I balance out with working as an affiliate marketer. To anyone who doesn’t have a career focus I would say do what you love and you’ll never ‘work’ a day in your life!