Its amazing how much time and energy I put into procrastination, doubt, fear and indecision. I have spent years doing it. What if I had spent that time doing productive affirmations instead. Would my life be different? Yes, it definitely would but I wouldn’t have learnt the valuable lessons I did from all my negative thinking, programming and visualizations which created struggle, poverty, conflict and even violence.

The mind is an amazing thing and capable of much more than we credit it with. We are powerful creators. However our minds can also create problems for ourselves by dwelling on the negative, feeling insecure and under valued, and even focusing on conflict, hardship or plight. 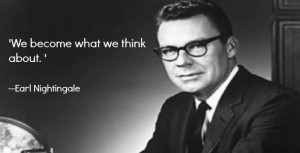 With our powerful minds full of positive intention and taking control of each moment to be more fully aware of our powerful thoughts, which are creating our futures each second, we can become conscious creators. Mostly we are unconscious creators – creating events, things, happenings and circumstances more out of neglect rather than from deliberate creation.

In Napoleons Hill’s book Think and Grow Rich he talks about the mind as a fertile garden spot which will grow weeds or plants according to what is allowed to grow. Likewise our conscious minds are feeding the ‘garden’ of our unconscious minds which are delivering circumstances and events in our lives. The ideas which ‘we permit to remain in the conscious mind’ will sow seeds of their like, whether we want them or not. Therefore it is wise to be conscious as to what you allow into your thinking, particularly on a regular basis.

I first came across affirmations in Shakti Gawain’s book ‘Creative Visualization’ in my 20’s. I didn’t persevere very long and was on to the next ‘exciting thing’ before I really understood the power of the concept. After delving into more books on The Law of Attraction such as ‘Working with the law’ by Raymond Holliwell, ‘The Science of Getting Rich’ by Wallace Wattles and others like ‘Think and Grow Rich’ by Napoleon Hill, the theme of affirmations and beliefs was a concurrent idea. If you haven’t watched The Secret you can watch it here:

I recently found a video of Bob Proctor’s (Who appears in the above film), which had a great affirmation in it which I will share here:

“I am so happy and grateful now that, money comes to me, in increasing quantities, through multiple sources, on a continuous basis.” Here’s his video in which he shares the affirmation and explains it a little more:

Affirmations are powerful suggestions which when repeated over and over (especially with feelings and images associated with them) will instruct the unconscious mind to generate like results. We do this on an unconscious level many times throughout the day, often instructing ourselves to fail! How many times a day do you criticize yourself with your internal dialogue? Or put yourself down when talking to yourself? We create conflicts, arguments or fights by our continually thinking of them! We even create false ceilings of success for ourselves with our dialogue, telling ourselves how little we are capable of. Really, there is no limit to what we can achieve, but that which we set for ourselves, and continually tell ourselves.

A friend of mine is a buddhist and uses mantras in a similar way. A buddhist mantra is ‘Nam Myoho Renge Kyo’ and is repeated hundreds of times and can be translated to ‘I devote myself to the Lotus Sutra of the Wonderful Law.’ It is considered to be a means to enlightenment through the law of the universe. Nichiren (1222-82) established the chanting of Nam-myoho-renge-kyo as the way to awaken one’s Buddha nature and tap into the deepest levels of our existence, on which our own lives and that of the universe are one. More on this here. My friend started chanting on a daily basis and within a few months had experienced an improvement in his financial conditions, which were fairly dire at the time he began. He put it down to his daily chanting.

Another great book I found on this topic is Stuart lichtman’s how to get lots of money for anything fast! Stuarts book is definitely one of the most definitive works on affirmations and goal setting but not for the faint hearted. It suggests multiple repetitions of affirmations, with corrections to adjust to your competing and conflicting inner desires, goals and ideologies. You also need to write out your affirmations multiple times. I highly recommend this book for achieving any goal. You can get it here:

The idea is based on parts integration and often when we set a goal we have other, conflicting parts of ourselves which aren’t in alignment with those goals. Even though we may want something to manifest in our lives, there is often an inner blockage which stands in our way. Affirmations and mantras are a great way to remove these blockages and find them in the first place.

If you have problems with the Bob Proctor affirmation I mentioned earlier, it could be you have conflicts with the ideas suggested. Here’ the affirmation again:

“I am so happy and grateful now that money comes to me, in increasing quantities, through multiple sources on a continuous basis.”

This may not be true for you at this moment but if you repeat it daily multiple times for many years it will become your reality, if you believe it. Noticing your issues with affirmations like this allows you to adjust them so that they are in alignment with your long term goals and aspirations and with your values.

When we are working towards something there can be invisible roadblocks which prevents us from attaining the thing which we want. These are often inner, unconscious beliefs. If you have a strong unconscious belief such as ‘money is evil’ or ‘wealthy people are greedy’ then you will sabotage your efforts to become rich due to this conflict. Your belief that you are an honorable and worthy person doesn’t match with also being ‘greedy’ therefore your unconscious mind sabotages your wealth in many devious ways. Only when you uncover these hidden beliefs can you step beyond your limiting paradigm. Affirmations are a good way to do this. As you notice you are uncomfortable with certain positive affirmations around money, you will have found a clue to your limiting ideas surrounding those areas.

Grab yourself a free video series and learn how to build your own business around your passion here.